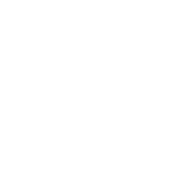 NEW!
A trip to Normandy, just a stone’s throw from the famous chalk cliffs and the Alabaster Coast. From Huttopia Les Falaises – Normandie campsite, enjoy the views over the rolling countryside and the English Channel in the distance as well as the holiday spirit of the site. A fully renovated campsite with beautiful heated outdoor and indoor pools.

Camp in Normandy, looking out over the sea

Huttopia Les Falaises – Normandie campsite invites you on a trip to Normandy to discover the landscapes and the cultural wealth of the Alabaster Coast. Located in Saint-Pierre-en-Port in the Seine-Maritime, discover this campsite offering clifftop views over the English Channel. Enjoy a holiday in the heart of Impressionist Normandy, its seaside towns, and its 130 km coastline carved out against the sea. 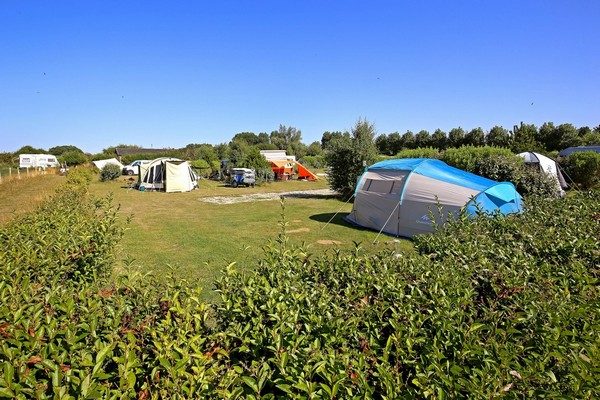 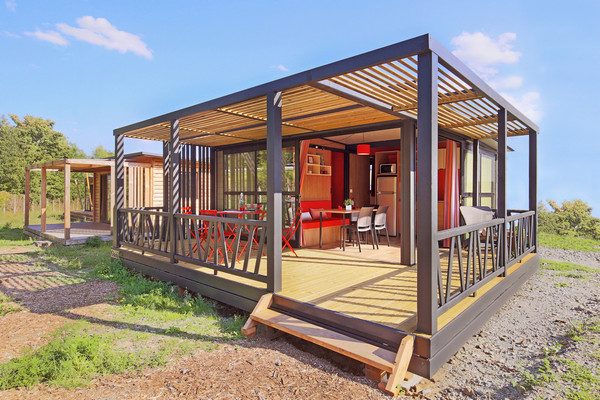 On site, enjoy quality services on a fully renovated site: the beautiful swimming pool area, one of which is covered and heated, central lodge, food services in the summer time, a family activity programme and brand new accommodation…

Like those creature comforts? Try out our new accommodation

Let yourself be soothed by the surrounding nature from your Ready-to-Camp Wood & Canvas tent, your Wood Trailer or your Wooden Chalet. For camping lovers, spacious pitches await you as well as brand new washrooms.

At the end of the day, make the most of the new facilities on site: the beautiful swimming pools (1 heated and covered, 1 outdoor), the children’s playground and the cosy Central Lodge. To enjoy the sea air? Have a picnic at the end of Huttopia Les Falaises – Normandy campsite and admire the views at sunset.

Stay at Huttopia Les Falaises – Normandie Campsite in a Wood & Canvas Tent or Chalet. All our holiday rentals open out onto the surrounding nature, offering a light and spacious atmosphere with their indoor/outdoor design and additional heating for all seasons. 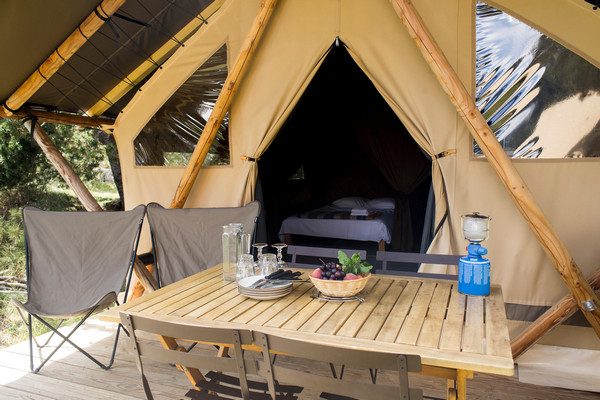 20 m² - 5 pax
Enjoy a camping adventure under a canvas roof. Original accommodation inspired by the habitats of the Far North, offering the true camping spirit but with real beds! Discover 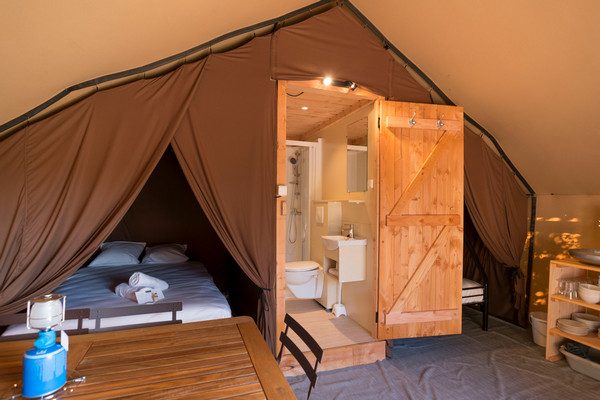 25 m² - 5 pax
Featuring a wood burning stove and a bathroom, this tent offers a unique experience for a holiday escape in true comfort. Discover 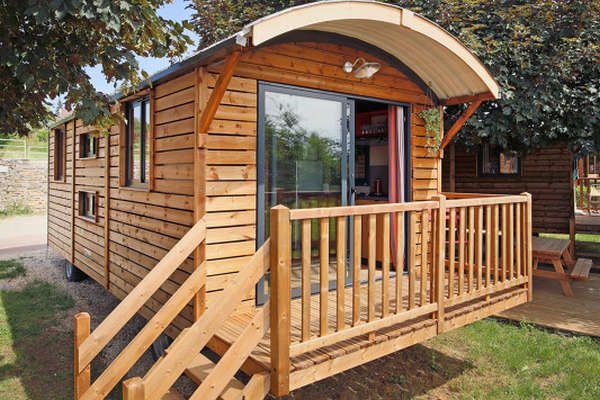 24 m² - 4 pax
Ideal for a couple or with children, the Wood Trailer's two bedrooms are carefully thought out and the living area opens out into the surrounding nature. There is everything you need for a comfortable stay with a touch of originality too. Discover 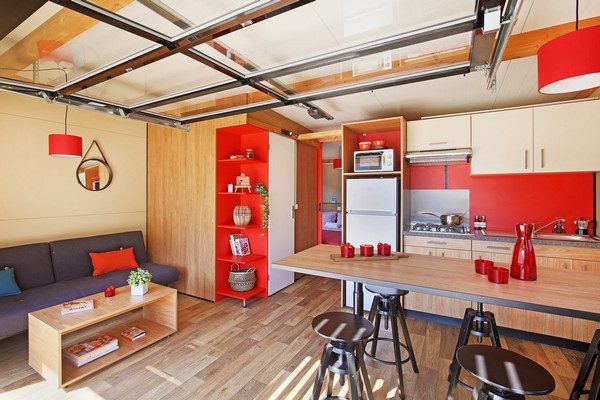 35 m² - 6 pax The ultimate indoor/outdoor atmosphere. This spacious chalet has 2 bedrooms, a living room, a kitchen and a large bathroom. A glass sliding door opens right up to give access to the 12 m² terrace. Discover 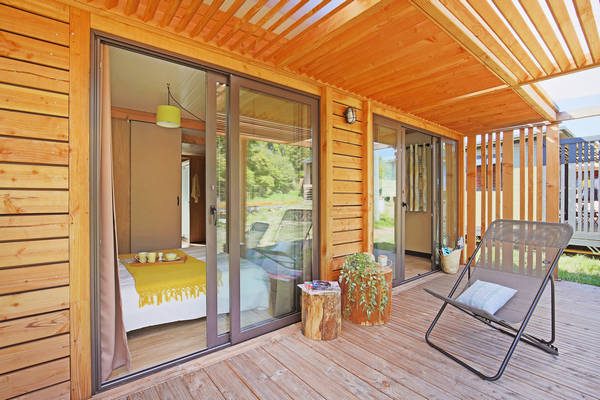 33 m² - 6 pax 3 bedrooms for maximum comfort! Private bathroom, equipped kitchen and lounge area. You can make the very most of the surrounding nature thanks to its large terrace and glass doors. Discover 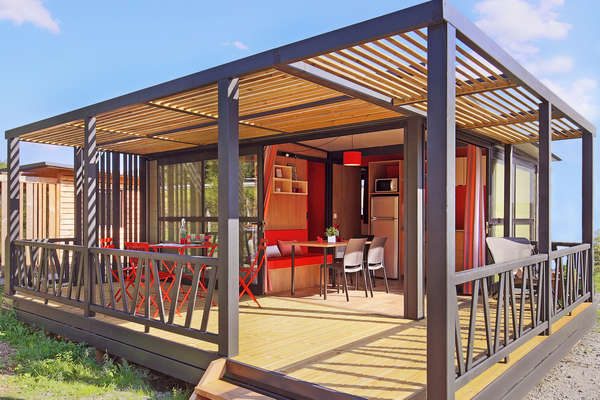 25 m² - 5 pax A chalet offering even greater immersion in the surrounding nature with its optimal indoor/outdoor living area. A large terrace, plenty of storage space, a modern decor and an equipped kitchen. Discover 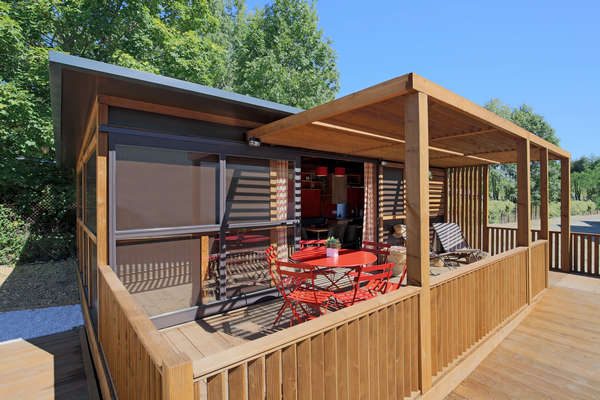 35 m² - 4 pers. With its access ramp, large bright living room, 2 bathrooms and large bedrooms, the Ontario has been designed in partnership with a company specialised in disability needs. Discover 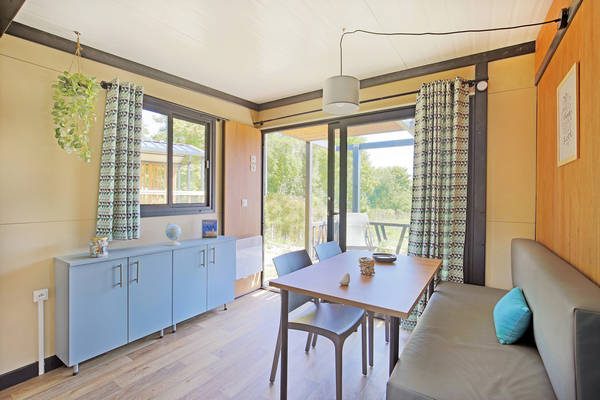 25 m² - 5 pers. A bright chalet opening out onto the surrounding nature! This pretty chalet offers a much appreciated indoor/outdoor living space, and boasts some ingenious design features too. Discover
The Little Extras!

* Subject to availability – must be booked by phone.

You can set up your tent, caravan or motorhome on one of the campsite’s peaceful pitches. They all have electricity! 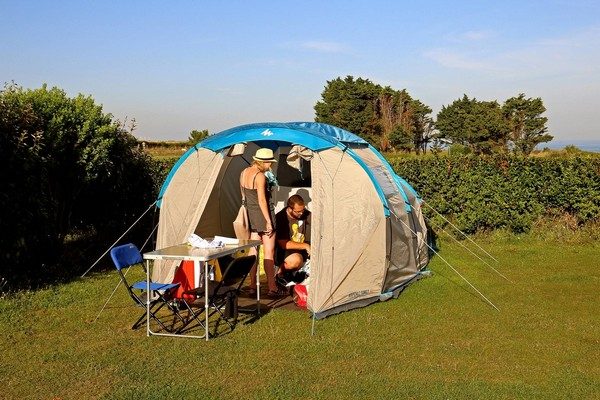 There is no better way of rediscovering the joys of traditional camping than waking up to the sound of birdsong on one of our Comfort pitches... The Comfort pitches all offer electric hook-up. Discover 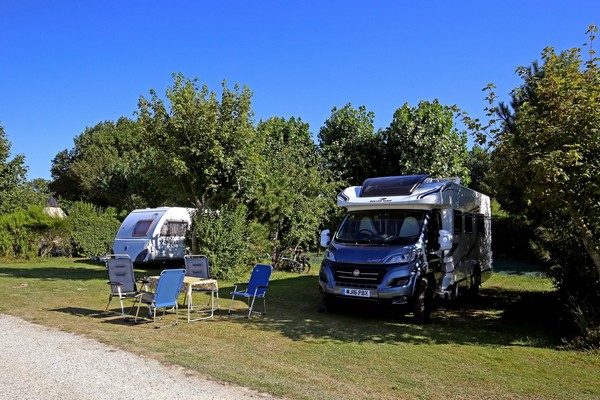 For one night or more, we offer large, flat pitches for a truly comfortable stay. A motorhome service area is also available at Huttopia Les Falaises - Normandy Campsite. Discover 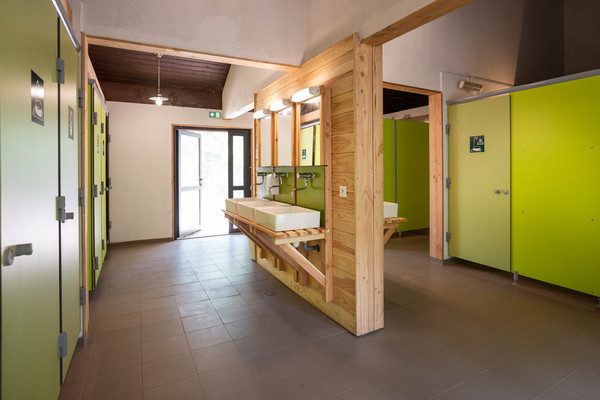 > The bread service for fresh bread every morning
> A laundry area with washing machines and dryers (tokens and laundry powder on sale at reception)
> A motorhome service area is available for your use at Huttopia Les Falaises – Normandy Campsite
> Campers can hire fridges and barbecues
> Are you short of tent pegs or guy ropes? You can buy all those little basics at our “campers’ corner”!
> Travelling light is easy thanks to our baby kits (cot + high chair)

You will love waking up to the smell of the sea air just a stone’s throw from the famous chalk cliffs of Normandy. You will also appreciate the food service and new central lodge at this destination.

At Huttopia Les Falaises – Normandie Campsite, the food is simple and convivial.

Homemade pizzas, refreshing drinks, ice-creams… all these little holiday treats await you at the Snack Wagon!

Fresh bread every morning!
> Order your bread and pastries the day before.
> Tea, coffee, orange juice, bread, jam, and pastries… Opt for a breakfast menu so you have nothing to prepare. 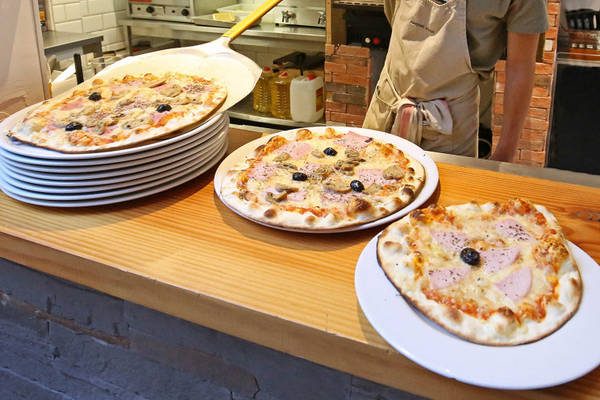 Have you just arrived at Huttopia Les Falaises – Normandie Campsite? Our team is at your disposal throughout your holiday to provide you with tourist information on the highlights of the Normandy Coast.

Other services:
> Internet point at reception and free wifi in the central lodge and on the terrace
> Barbecues and fridges for hire
> Laundry area with washing machine and dryer (tokens and laundry powder on sale at reception) 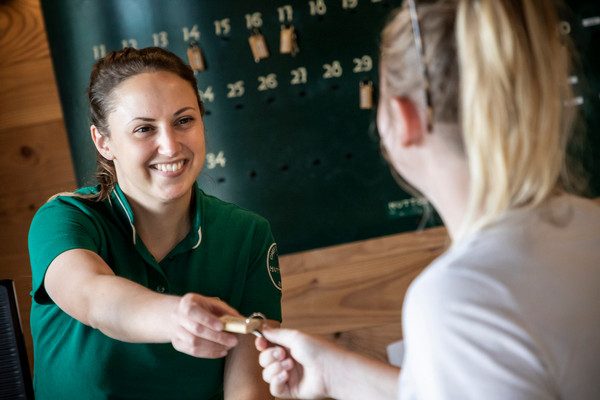 Just 300 metres from the campsite, the village of St Pierre en Port offers all the amenities.

New swimming pools
Huttopia Les Falaises – Normandie Campsite has an outdoor swimming pool, an indoor heated swimming pool and a paddling pool. Ideal for having fun as a family or enjoying for a tranquil early morning dip.

Deck chairs are available for you to settle back in the sun or read your favourite book.

Seascapes
To splash about in the sea or enjoy a spot of fishing, the beach at Saint-Pierre-en-Port is located just 1km from the campsite… Accessible along a pretty footpath offering stunning views, you will love the charm of the pebbled beaches. 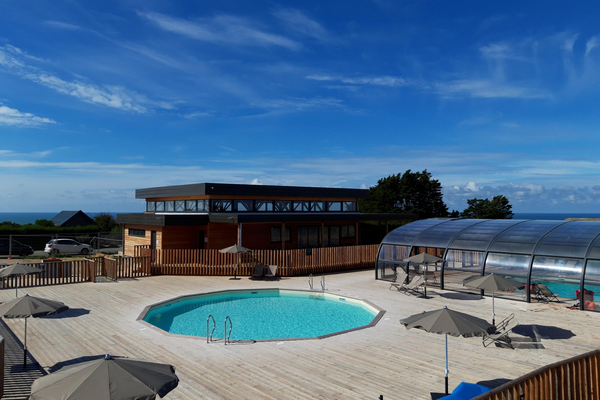 Free activities to have fun and make friends during the summer holidays.

Children aged 5 to 12 can build dens, go on treasure hunts and experience all sorts of wonderful adventures! 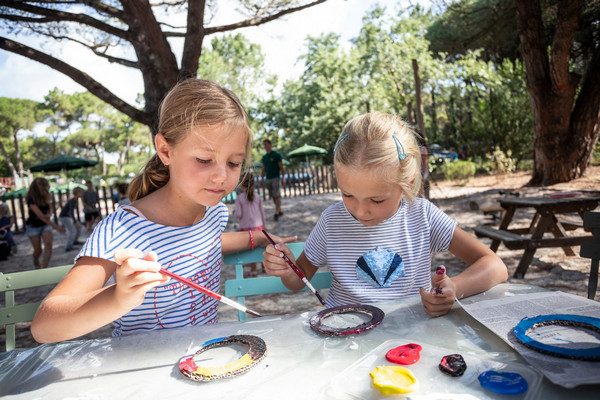 The beaches of the Normandy coast

For a dip in the sea, you have plenty of choice! Walk down to the beach in Saint-Pierre-en Port (800m away) or the beaches of Grandes Dalles, which are 1,7km away along the long-distance footpath. A little further afield, you will fall in love with the mythical seaside resorts of Dieppe, Etretat, Veules les Roses, Petites Dalles and Fécamp with their small colourful beach huts and pebbled beaches, typical of the Normandy coast… You can go on a day trip to enjoy the waves and collect shellfish.

The grandiose spots of the surroundings:

The White chalk cliffs of the Alabaster Coast

Etretat, a must see, former fishing village
> Don’t miss a walk along the Chemin des Douaniers footpath alongside the cliffs.

The land of the impressionists

In Honfleur or Dieppe, follow in the footsteps of the greatest impressionist painters who took inspiration from the landscapes of Normandy: Claude Monet, Pierre-Auguste Renoir, Edgar Degas, Camille Pissarro… The region is home to the most emblematic Impressionist sites.

Normandy offers something for everyone, not just sports lovers! The Seine-Maritime is steeped in gastronomy! With its seafood, scallops, oysters and herrings, juicy apples and cider, cream and Livarot and Neufchâtel AOP cheeses, culinary specialities abound in the region.

SO MUCH TO SEE AND DO

Paddle boarding under the Cliffs of Etretat? Sand yachting on the beach? A trip on an old-fashioned fishing boat from Fécamp harbour? All along the Normandy coast there are a multitude of water-based activities for you to enjoy, from windsurfing to sea kayaking, paddle boarding, sailing and kitesurfing…

The Etretat Tourist Train
Setting out from Étretat or Loges station, climb aboard the little tourist train running along a 5km century-old railway track through the midst of a green valley. There are 4 to 5 departures per day depending on the time of year.

Maze and treetop adventures
For a fun afternoon as a family, head to Fécamp with its multi-activity leisure park and treetop activities. Nearer to the campsite, in Sassetot-le-Mauconduit, your kids can have fun in Dalles maze, which offers 4 courses and riddles to solve. 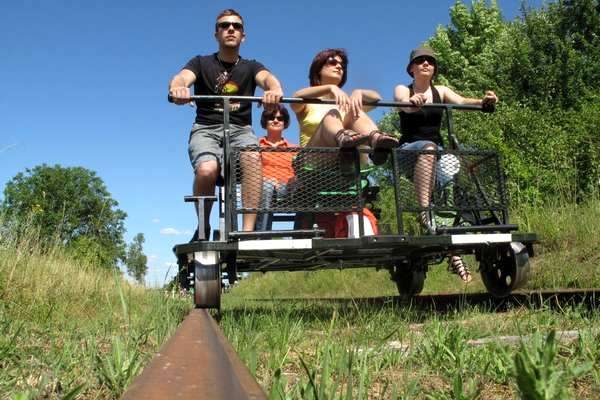 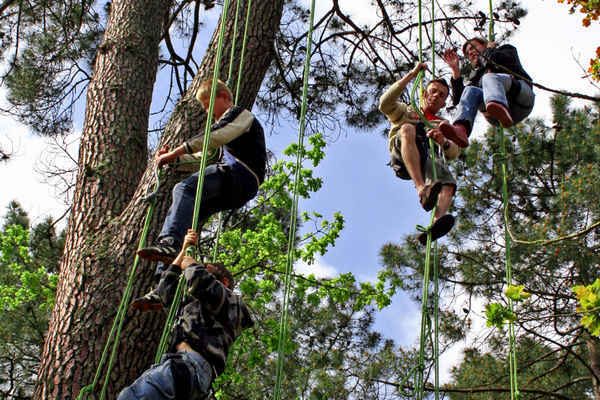 almost 5 stars. But some improvements are possible like desiring dressingroom at the swimmingpool. But very clean and well organised. 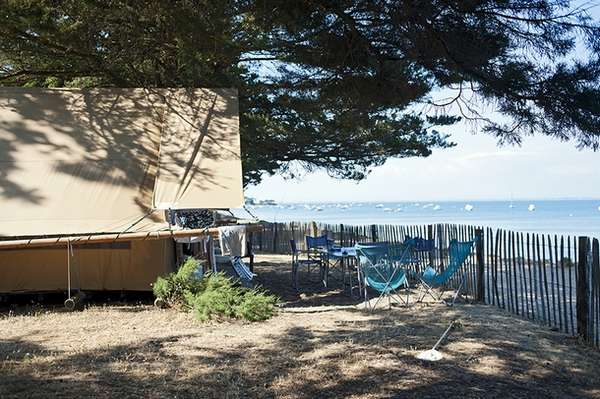 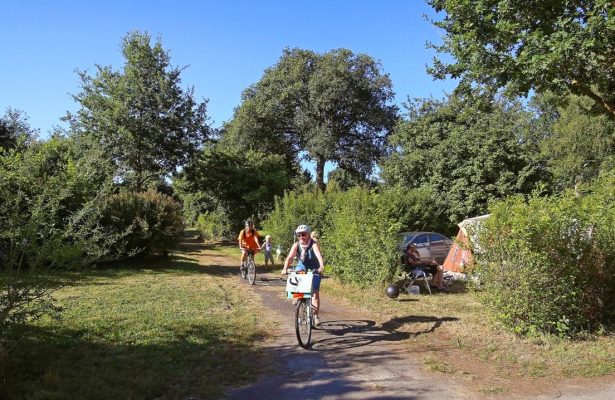 To be the first to know about Huttopia's news and promotional offers!

Cookies are essential for the site to function properly and allow us to improve your browsing experience on our site, to use certain sharing features on social networks and to offer you content and advertising based on your interests. Click on "Accept" to accept cookies and go directly to the site or click, on "Change settings".
Privacy PolicyCookie settings.REFUSEAUTHORIZE EVERYTHING
Manage consent

Cookies are essential for the site to function properly and allow us to improve your browsing experience on our site, to use certain sharing features on social networks and to offer you content and advertising based on your interests. Click on "Accept" to accept cookies and go directly to the site or click, on "Change settings".
Analytics Always Enabled

Analytics cookies are used to understand how users interact with the website. They provide information about the number of visitors, traffic sources, bounce rate etc.

Required cookies are absolutely necessary for the functioning of the site. They provide basic functionality as well as ensuring the security of the website itself, on an anonymous basis.

Functional cookies help to implement certain functionalities such as sharing data to social media and collecting feedback on content.